Yes, about the same amount as a loaf of white bread, says Adrian Hodgson, co-founder of Real Kombucha…

You must have heard of kombucha by now. It’s everywhere, and everyone seems to be drinking it. Why? Well, mainly because it’s a naturally sweet-and-sour drink, brewed in the same way that you might brew a fine wine or a great real ale. It tastes so good you’ll wish you were the designated driver! Which begs the commonly-asked question: does kombucha contain alcohol?

We set up Real Kombucha as we were frustrated with the lack of sophisticated, healthy alternatives to booze. Our kombucha has rich flavours which are produced not by adding any fruit or extracts, but by using high-end loose-leaf teas. Through the fermentation process, we are able to produce a low-sugar but flavour-rich drink which contains only a trace of alcohol. Without the fermentation process we would not be able to give our Dry Dragon that citrus kick, or bring out those rich apple and caramel notes in our Smoke House. Neither would we be able to draw out those white peach, vanilla or rhubarb flavours that make our Royal Flush so popular.

If you want natural flavours, you’ve got to know your fermentation process inside out. It can be vastly transformative to any food, drink or ingredient. As you may or may not know, fermentation is a natural process in which sugars are converted to alcohol by yeast. The novelty of kombucha is that the drink contains bacteria (which end up being very good for our guts – they’re known as probiotics) and these are responsible for converting the alcohol into organic acids.

(For kombucha brewers who have ever wondered what’s going on beneath that scoby: imagine it’s the door to a party – a door that has been sealed shut. Inside, the bacteria have got drunk on their own supply, finished off all the alcohol and just left the dregs for washing up. Would you say that there was any alcohol left at the party? If you were being totally honest, you’d say there was a trace.)

So what does that mean in scientific terms? If we make the claim that Real Kombucha is a viable alternative to alcohol, why are we also able to say that it contains a trace of alcohol? Does kombucha contain alcohol or not?

Does kombucha contain alcohol? If so, how much?

The simple answer to this question is that, yes, it does, but the amount is so small that it is thought of as a non-alcoholic drink. The amount of alcohol in most kombuchas is usually very low, ranging between 0.2 – 1.2 % ABV (alcohol by volume, which simply means the amount of alcohol per 100 ml). If you are brewing your own kombucha at home or buying it from home brewers then this often tends to be on the higher end of the spectrum.

Our brews at Real Kombucha contain only 0.35% ABV, which is extremely low. One way we keep our alcohol content so low is that we do not flavour our kombucha. Flavouring booch with fruit, juices and presses adds additional sugars which can, over time, increase the alcohol content. This was very important for us – we wanted rich, sophisticated flavours without running the risk of higher alcohol content in our kombucha.

In isolation, 0.35% ABV does not make much sense, so let’s give it some context. Most lagers in pubs and bars today will range between 4-6% ABV, with some craft ales reaching 8 – 9% ABV. For wines, this can vary between 9-13% ABV, while spirits such as vodka, gin and whiskey can range from 35-60% ABV. 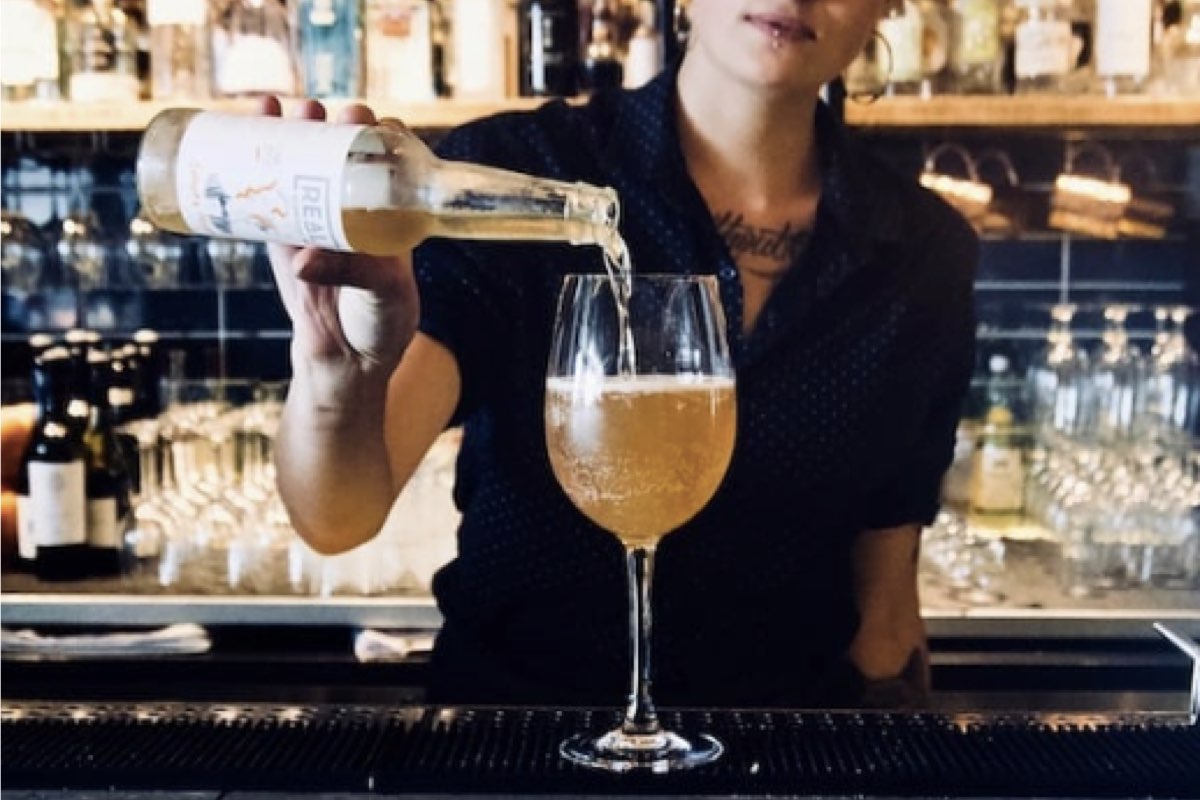 What’s the difference between non-alcoholic and alcohol-free drinks?

In the UK, for a drink to be considered “low alcohol”, it has to be below 1.2%. Most non-alcoholic beers on the UK market at the moment are less than 0.5% ABV – great examples include Nanny State by Brew Dog, Suntra by Nirvana Brewery and Erdinger. For a drink to be considered alcohol-free in this country, it must contain less than 0.05% ABV. Normally, alcohol-free beers and wines have either had flavourings and preservatives added or have been de-alcoholised (a different process that we needn’t go into here). Unfortunately, this means that the taste is not always great. At Real Kombucha, therefore, we are firm believers that fermenting kombucha and leaving a trace of alcohol ensures you get a great tasting drink that is rich and complex, full of naturally occurring flavours, while remaining healthy.

Let’s go back to that 0.35% ABV I mentioned earlier, and try and give you a sense of what the term, “trace of alcohol”, actually means. Many of the foods which you’d happily consume on a daily basis contain similar amounts of alcohol. Alcohol is actually all around us, even when you’ve locked your drinks cabinet.

Which everyday foods contain a trace of alcohol?

Leave a piece of fruit to ripen (which usually turns it brown) and you’ll initiate fermentation in the skin of the fruit. Pick up an apple that has fallen from a tree which has browned, smell it and you may notice a faint whiff of alcohol. Take a banana that is super ripe (slightly browned, which in my opinion is the best way to eat them) and it will contain around 0.1% ABV (converted from alcohol by weight). Press a fresh orange juice and it will contain 0.1% ABV. Leave it on your kitchen counter for an hour and it’ll increase to around 0.3% ABV as wild yeasts in the air fall into it.

And it’s not just fruit, either

Who loves a stir fry? I certainly do. A stir fry made at home using fresh vegetables and a little meat can contain trace amounts of alcohol (0.6 – 0.8% ABV). If you’re a fan of sweet and sour pork (easily substituted with tofu or seitan), the sauce will often contain trace amounts of alcohol (0.8% ABV). The addition of alcohol to dishes can sometimes be due to alcohol being used as a flavour or as a regulator of acidity, but in the examples provided these are often from the conversion of sugars by yeast in the process, or through the handling or storage of the food.

Breads are another example. Everyone knows that bakers normally use yeast to make bread. Bakers’ yeast will produce alcohol during the fermentation, which when heated (during baking) is often burnt off, leaving the bread alcohol-free. But on closer inspection, breads still contain a trace amount of alcohol. For example, a standard loaf of white bread can contain a trace of alcohol (0.2% ABV), as do crumpets (0.2% ABV). Interestingly enough, Dominos Pizza dough contains alcohol at 0.5% ABV, which – when the pizza is cooked – is left with a trace of alcohol (0.1% ABV).

So, to return to the question: does kombucha contain alcohol? Yes, but the trace of alcohol in our kombucha is similar to foods you probably don’t think twice about eating. 0.35% ABV is well below the amount that would have an impact on your health (our bodies are good at handling alcohol in small amounts), let alone get you tipsy or drunk.

How much kombucha would I need to drink to get drunk?

We’ve worked out that women would need to consume the equivalent of 26 bottles of Real Kombucha (over an hour or so), and men would have to knock back 36 in order to reach anywhere near the drink-drive limit in the UK. To feel drunk though, your quota would need to be even higher.

Doing the sums, you would need to drink around 104 Real Kombuchas in a hour or so in order to get drunk (based on hitting a blood/alcohol concentration of of 150 mg/100ml).

We’re going to go out on a limb here and suggest that two or three bottles of kombucha over an evening isn’t going to cause you too many problems. So go and get booch’d rather than bevvied this Friday night. It’ll be good for you.

This article was originally published on the Real Kombucha website