Are you curious about meditation but have been put off by a bad experience that confirmed that sitting in lotus pose whilst chanting with crystals wasn’t for you? Then try Meditation Unlocked – a new concept aimed at sceptical, modern day professionals.

Founded by property entrepreneur Niraj Shah, who used meditation to sharpen his edge after suffering a serious stroke, the series of events aim to introduce practical tools for mind optimisation whilst taking a look at the robust science that supports them…

How is Meditation Unlocked different to other programmes out there?

Today in London you can find meditation in religious centres, yoga studios and 6-8 week courses. You could also go away for a 10-day silent meditation retreat. I would struggle within one hour! I started looking for meditation sessions that were more easily accessible, with the focus on practical application backed primarily by robust science rather than a spiritual ideology. Also held in conveniently located, non-religious places with timings that make sense for busy professionals. I couldn’t find anything suitable so the idea for M: U was born.

Who are the events aimed at?

This is for London’s time-poor professionals, freelancers and entrepreneurs. I know this crowd well because I’m one of them. I had a high-pressure corporate career for nearly 10 years and have been running a growing business for over 5 years. I’m starting to realise how unique that makes me in the meditation world.

Can you tell us more about your personal journey with meditation?

I didn’t realise it at the time but my first meditative experiences were in my twenties whilst scuba diving. I got good enough to control my buoyancy with just my breath rather than through body movement. That and being underwater with no phones or email, no talking, somewhere otherworldly and full of wonder, breathing fully and slowly… In hindsight it’s no surprise that I felt euphoric and energised after almost every dive! In more recent years I’ve had lots of meditative experiences whilst on a snowboard. Snowboarding is my ‘meditation’ of choice.

In 2010 at the age of 30, I suffered a sudden and serious stroke. Until I had made a full physical recovery, which luckily I have, the only exercise I was permitted to do was yoga. Some time later I started my first business and yoga stretch became a near nightly habit because I noticed it would calm my overactive mind enough to let me sleep. It was the mental benefits that made yoga a ritual.

I got into what we could consider formal meditation – sitting quietly – when I was going through a particularly tough time at work and I tried a meditation app, it was the right thing at the right time. Soon I could cultivate the mental benefits of yoga without having to do anything physical and significantly faster. I realised that being able to change my mental state that quickly was really helping me in business. As a by-product it has also enhanced many other areas of my life.

I was hooked and became really curious, going on to practice meditation with a wide range of teachers from different traditions, trying lots of techniques by myself, reading about meditation, getting educated on the different scientific studies and analysing them critically. I started getting asked to lead meditations and at first I was unsure – after all, who was I to guide others?

With the blessing of my first meditation teacher, who is qualified in her tradition at the highest level and for whom I have the deepest respect for, I decided to go for it. I’ve led and guided a number of meditation sessions, which has forced me to take my own understanding to another level. 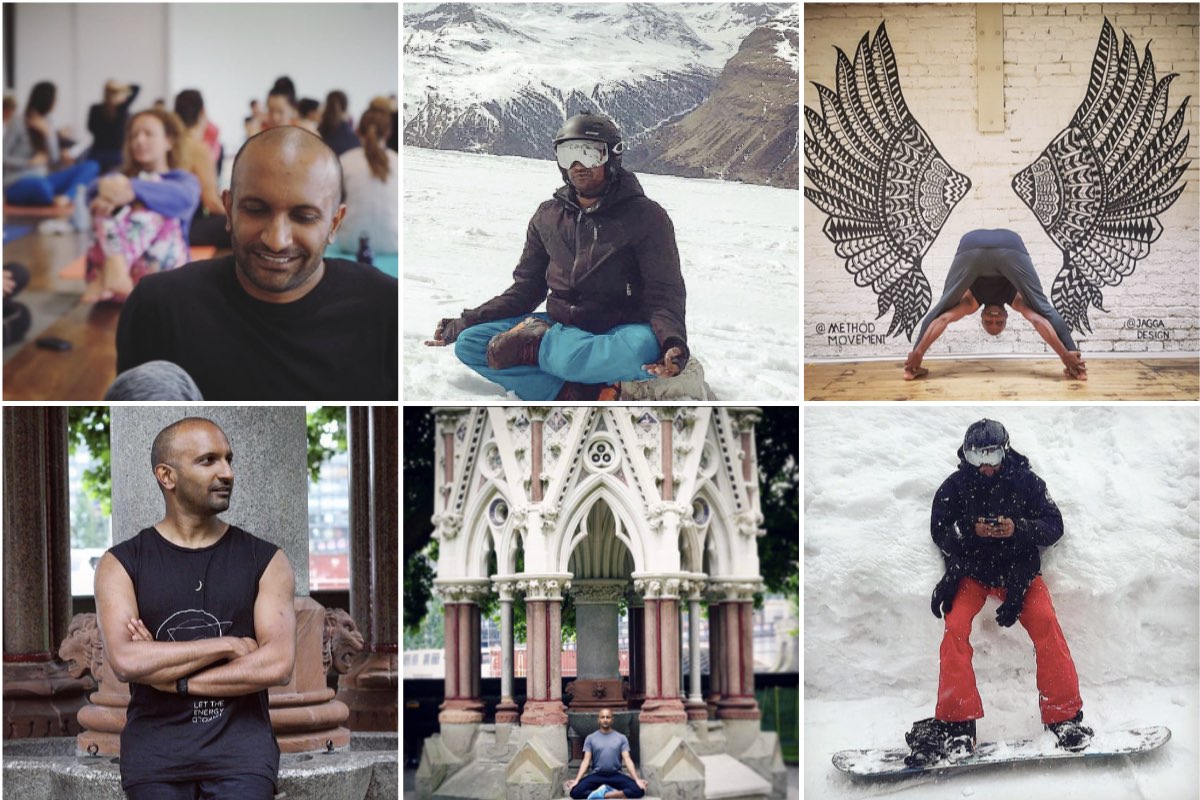 There is a lot of misconception around meditation and what meditation entails. What would you say to someone who thinks “I can’t meditate because I can’t clear my mind” or “I don’t want to do something really hippy / spiritual”?

It’s a real misconception that to meditate we need to be able to empty our minds. I respond that most meditative practices I have experienced involve focusing my mind rather than trying to empty it. If they ask more questions that’s great and if not that’s also fine by me. I’m not out to convince people that they should meditate; I find that sort of thing a little irritating myself. I wholeheartedly believe anyone can benefit from meditation and I’m excited to help people who are curious about it.

As for not wanting to do something spiritual or hippy, I totally get that. I’ve got nothing against spiritual beliefs personally, but I know many folks find that element off putting. M: U takes a practical, logic driven and evidence based approach to meditation. I know for a fact that meditation doesn’t have to be all ‘new-age’ to be effective. That’s what I want to share.

Depression is still the biggest killer of young men under 45 in the UK. What more do you think could be done to help?

Public figures like Prince Harry and others talking about mental health is helping to both increase people’s knowledge and reduce the stigma attached. The more of those things, the better.

Meditation has been proven to help with a number of mental health conditions but this must be overseen and administered by a specialist. A generic event like ours is not appropriate. I am taking the mental health implications of what I do very seriously so I’ve appointed a clinical advisor to give M: U a clinical care perspective on our events and communications.

I think Google’s integration of the PHQ-9 tool is a big step in the right direction and I’m looking forward to it being rolled out in the UK. It’s wonderful to see them using their platform to raise awareness of not only the issues but also some potential solutions, that’s also something I want to do.

To that end M: U has partnered with Mind, the UK’s mental health charity. A percentage of sales revenue will go directly to them and we will use our voice to raise awareness of Mind’s ability to help with potential solutions. 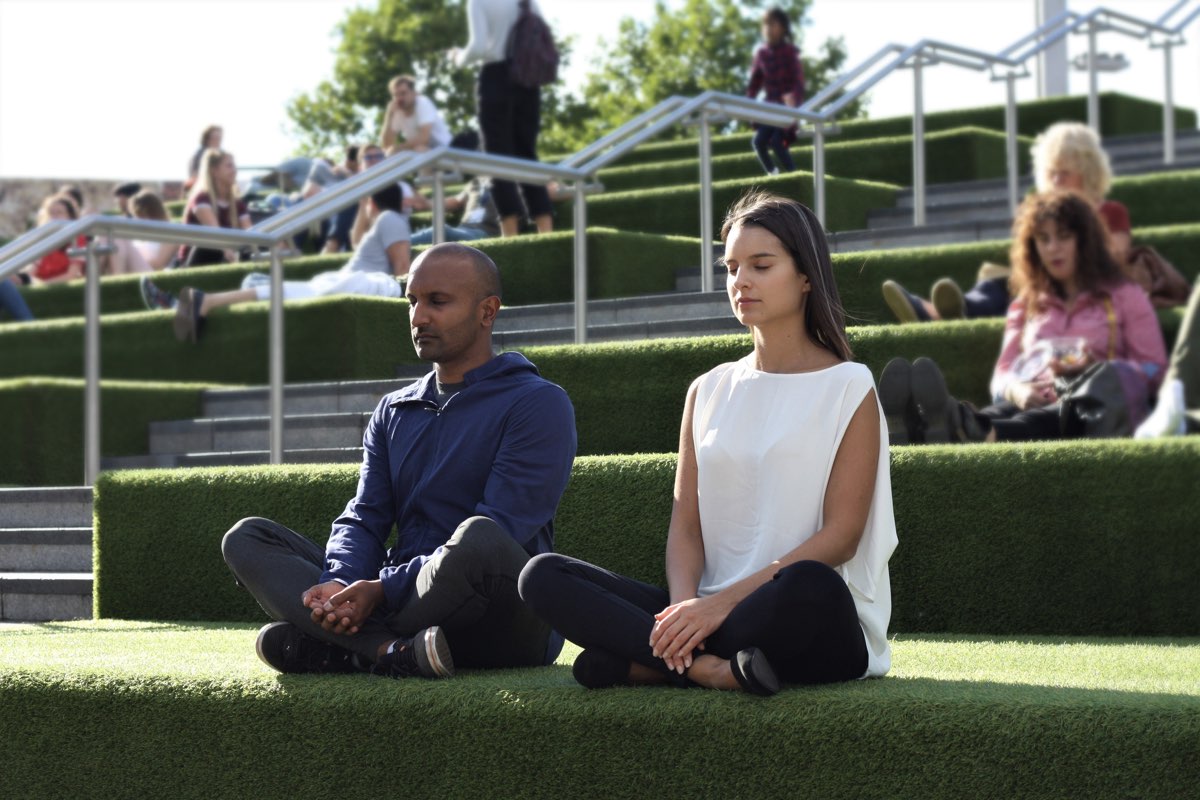 You’re working alongside Ashley Hunt, the wellness coach and meditation teacher. How did that relationship come about?

Ashley is the lead meditation guide for the initial 2 months of M:U as a pop up series, so she’ll be leading a lot of the sessions whilst she’s here in London before she heads somewhere warmer for the winter. We started following each other on Instagram, I liked her vibe so I asked to meet for a coffee and within 5 minutes it was clear that we share many of the same views on meditation and how to open it up to new audiences who will really benefit from it. I’m really pleased to be working with Ashley, she’s helped me a lot in general and she’s very well connected and respected in the wellness world.

Since yoga and meditation are both part of the same ancient traditions and philosophies, why do you think yoga has taken off so quickly and meditation has taken it’s time/been harder to appeal to the masses?

Some meditation comes from yoga; indeed the older yoga forms were actually very focused on meditation rather than physical postures. Other meditative practices come from sources as diverse as old religions like Judaism, Buddhism – which has popularised the concept of mindfulness – and Islam to newer developments such as elite professional sports coaching and elite executive coaching.

I feel meditation is coming to the forefront now because of the world we have created in the last 10 years. The explosion of smartphones and social media means we have 24/7 access to infinite information and entertainment. It’s a truly incredible time to be alive, but the downside is that we are open to being consistently over-stimulated and not getting the mental rest and recovery that we need in order to function optimally.

An over exercised body will inevitably lead to it breaking down, the mind is no different and we are starting to learn that. It’s becoming accepted through robust scientific proof that meditative practices can help us get that rest and recovery as well as systematically increase our abilities to focus, remember things and create.

Anyone who has seen my Instagram feed will know that I love a good yoga stretch. I truly believe meditation can and should be more accessible and beneficial to way more people than even yoga. That’s why I’m focusing my time and energy on helping folks to access the benefits of meditation as something entirely separate from yoga.

How do we stop mental health and meditation becoming “trendy” topics that take the focus off the real people suffering from depression?

This is a tricky one, I’m not sure we can stop them from becoming trending topics. My belief is that the more awareness people have about them the better and perhaps this may lead to people becoming better informed about more serious mental health conditions like depression.

When can we try a Meditation Unlocked session?

Our launch session is on Monday September 4th at the gorgeous Maple & King’s in King’s Cross and from then we’ll have weekly sessions throughout September and October. We’re working to add more locations and timings. We’ll only be sharing ticket info via our mailing list at www.medunlocked.com as well as some no nonsense, practical meditation ideas and tips, so those interested should sign up there.

Restore mind & body with this deeply relaxing, musky scented aromatherapy candle to help calm your mind as you unwind